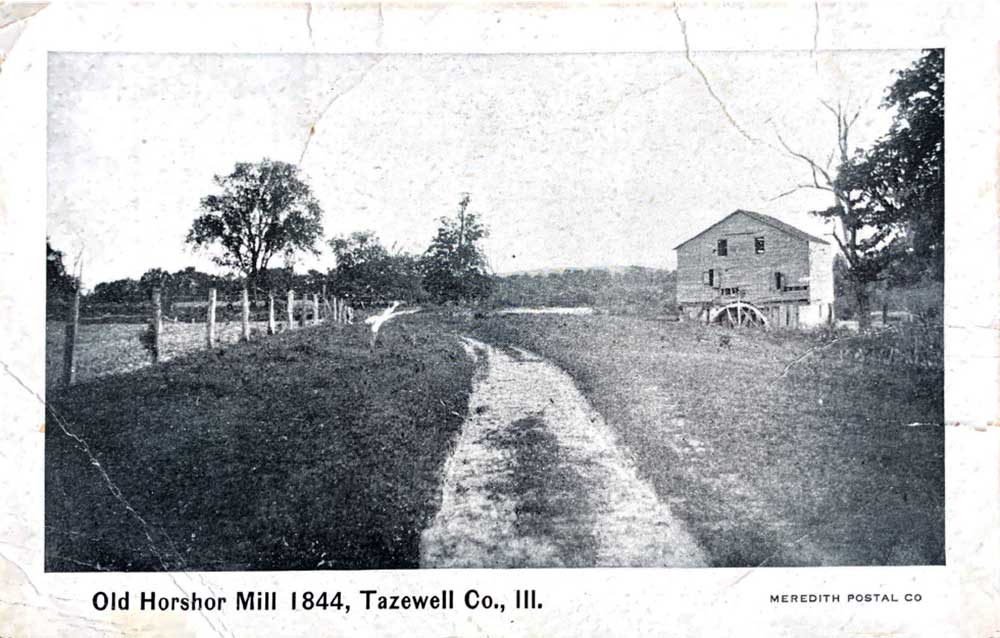 The Horshor Mill was actually the Hoshor Mill
but was it in Tazewell or Woodford County?

Actually, it was in both counties!!

Here’s what archivist Rindi Shannon had to say about it in her 17 September 2015 “In Search of Family” column in the Pekin Daily Times:

“I recently purchased an old postcard with a black & white photograph on it.  It was a rural scene with a dirt road, a fence and an old mill.  It was labeled “Old Horshor Mill 1844, Tazewell Co., Ill.”  I decided to try and find the location of the old mill.

One of the nice things about belonging to a genealogical and/or historical society is the knowledgeable people.  There is always someone who has been doing research longer or has more experience in a certain area than I do.

I showed my postcard to TCGHS president John Durdle and asked if he knew where the Horshor Mill might have been located.  He said he thought it might have been in Woodford County.  That was all the help I needed.

The Woodford County History 1968 said the mill was built by William Hoshor in 1835, but by 1878 business had declined and little evidence of it remained by 1910.”

When the mill was originally built in 1835, it was located in Tazewell County.  On 7 February 1843, the Illinois Legislature authorized Woodford County to gain from Tazewell County all of township 26 north [including the Hoshor Mill], east of the Illinois River (except for small area around East Peoria), dependent on local referendum that failed [no change]. (Ill. Laws 1842-1843, pp. 86-88)