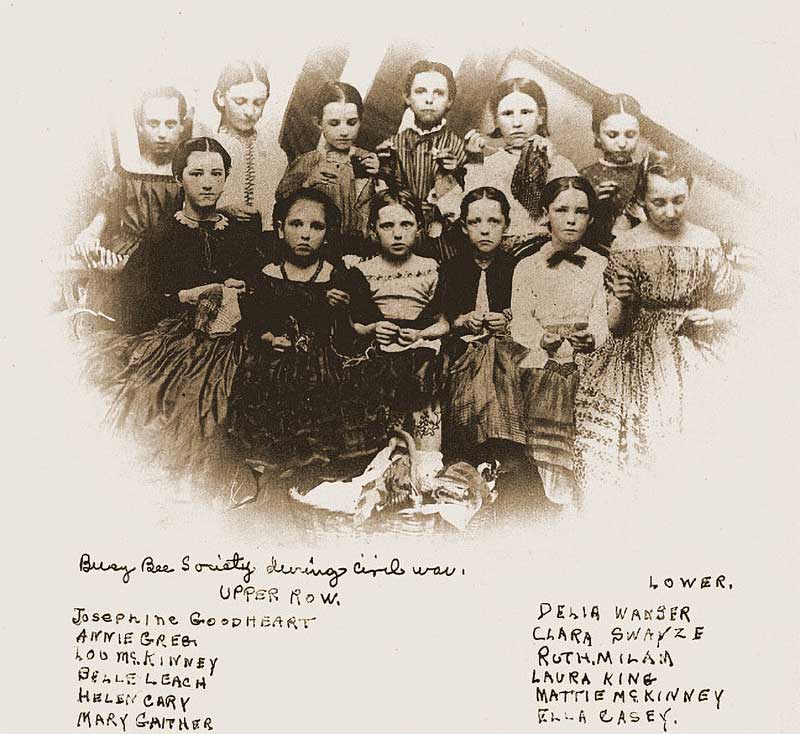 “I assume the picture was taken between 1862 and 1865.  Josephine Goodheart, (first girl in the back row on the left) was my great-grandaunt. She was born in 1854, and looks to be around 9 or 10 years old in the picture.

She was one of the early principals of Pekin High School.  There was a bell in the old Washington Junior High School [originally used as the high school] with her name "Josephine" on it.

She married Lemuel Allen in 1898.  Josephine's father was Second Lieutenant John Goodheart, who was in Company C of the Second Illinois Calvary, and was killed in a battle at Merryweather's Ferry in Dyer County, Tennessee on August 16, 1862.

Josephine's sister was Kate Goodheart Woost, who was my great-grandmother. Her mother was Sarah Catherine Shober, whose family settled in Tazewell County before 1840.  Sarah married Steven Roney in 1868.

Lou McKinney (third girl from left in the back row) was Josephine's cousin. Her name was actually Lewis Ann McKinney, after her father, which I find very interesting.

I have just recently come into some information from a family Bible that I didn't know existed, and haven't had much time to research this family. I don't know if the other McKinney child is Lou's sister or not.  The Bible identifies another child as Ophelia.

I don't know anything additional about the sewing circle, I believe the Goodheart girls were Methodist, but I wouldn't swear by it.

As you can see, the children are identified at the bottom of the picture. I believe the handwriting is my great-grandmother's, great-grandaunt Josephine's, or their mother's.”