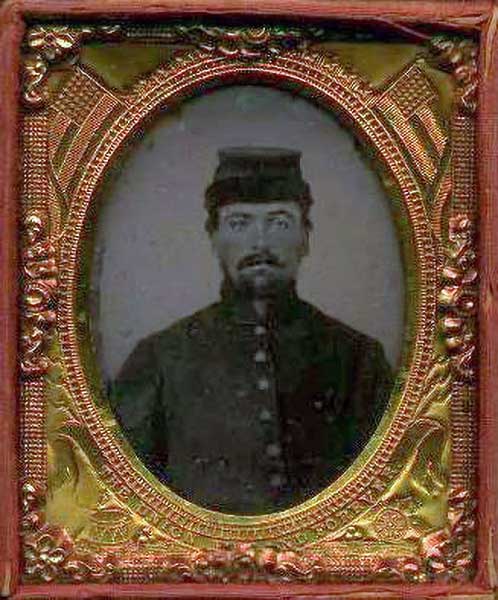 According to the official roster, James Anson Williams enlisted in Mackinaw  (nearby his home in Lilly] was mustered into Company I of the Ninety-Fourth Regiment of the Illinois Infantry in McLean County (Bloomington, Illinois) on August 20, 1862.  He was described as age 24, single, 5' 8 ½” tall,  light complexion, sandy hair, and grey eyes,

According to the “Brief Historical Sketch” contained in the McLean County Museum of History's documentation of The Ninety-Fourth Illinois Volunteer Infantry Regiment Collection:

“The Ninety-Fourth Illinois Volunteer Infantry Regiment was mustered into service the summer of 1862.  This regiment was important in that it was comprised entirely of volunteers from McLean County.   The response was so great that several companies of McLean County men had to be placed in another regiment… [Webmaster's Note:  Company I did contain a limited number of soldiers from Tazewell County, including James Anson Williams.]

The regiment left Bloomington for St.  Louis on August 25, 1862 with a force of 930 men.  In St.  Louis, the regiment trained through the autumn.

On December 7, 1862, the Ninety-Fourth participated in the Battle of Prairie Grove, Arkansas.  Repeated Confederate charges were repelled by the Union troops.  Despite seeing heavy action, the Ninety-Fourth’s casualty list included only one killed and twenty-six wounded.

After participating in a minor campaign to secure Van Buren, Arkansas, tragedy struck New Year’s Day 1863.  As the Ninety-Fourth was marching back into Missouri, Company H Captain Joseph Orme was accidentally shot through the lungs, mortally wounding him.  On January 6, 1863, during a Confederate assault on a Springfield garrison, the Ninety-Fourth suffered one dead and two wounded.  One month later, seventeen men from the regiment died from pneumonia.

In June and July 1863, the Ninety-Fourth participated in General U. S. Grant’s epic Siege of Vicksburg, Mississippi.  The Ninety-Fourth’s role in the siege included digging trenches and capturing rifle pits.  Vicksburg, the last Confederate stronghold on the Mississippi River, fell on July 4, 1863.

In August 1863, after an uneventful expedition to Yazoo City, the Ninety-Fourth was sent to Carrollton, Louisiana, located six miles north of New Orleans.  Here, the regiment struggled with the swampy terrain, insects, a lack of fruits and vegetables, and the oppressive heat.

On September 5, 1863, the Ninety-Fourth engaged in a “running battle” at Morganza, Louisiana with a pocket of Confederates.  During the fighting, Col.  McNulta was shot in the hip.  Though he survived and continued to lead the regiment, he had the noticeable limp the remainder of his life.

On October 25, 1863, the Ninety-Fourth boarded a Gulf Coast steamer and participated in the capture of Brownsville, Texas.  The regiment stayed in Brownsville for several months, checking the ability of Confederates to cross the border.”

During the occupation of Brownsville, James Anson Williams was discharged in New Orleans on January 7, 1864 because of disability. 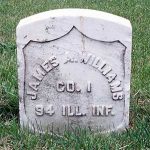 After his discharge, James returned to Lilly where he ran a general store for several years.