The Tazewell Genealogical & Historical Society published a cookbook in 1998 entitled Cooking Up Memories.  The book contains over 700 Tazewell County recipes, 40 historical pictures, 30 sketches, and many “Tazewell Tales” of county happenings. 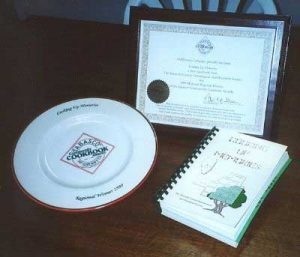 Cooking Up Memories was selected as the Midwest Regional Winner for the 1999 TABASCO® Community Cookbook Awards.  These awards were given by the McIlhenny Company from 1989 to 2009 to recognize the role cookbooks play in chronicling and preserving our American local and regional culinary traditions.   Copies of the book were placed in the Walter S. McIlhenny Library for community cookbooks on Avery Island, Louisiana.  Besides a cash award, the society received a plaque, a certificate, and award stickers for the remaining books.  In 1999, the cookbook was also featured on the Tabasco® website.

The awards press release stated “The Midwest Regional Winner is an interesting book called Cooking Up Memories, produced by the Tazewell County Genealogical and Historical Society, in central Illinois. Though it may lack in culinary sophistication, it more than makes up for it in richly told tales of early pioneer life and farm living. Many of the recipes feature few ingredients, which reflects the simple nature of rural Midwestern cooking. A number of recipes also refer to old family cookbooks that were passed down from generation to generation. The last section of the book is all old wives’ tales and advice culled from the personal collections of Tazewell County residents. Typical recipes include Corn Fritters, Salmon Crackers, and Potato Cheddar Chowder.”

Since we’ve received the award, the cookbook had favorable reviews in the Peoria Journal Star, Pekin Daily Times, and Chicago Tribune newspapers.  We’ve had inquiries from individuals and cookbook stores from all over the country.  Sales have boomed!

Cooking Up Memories was also featured in America’s Best Recipes–A 2001 Hometown Collection, published by Oxmoor House, Inc. Our cookbook was one of only 146 from across the nation so honored! Two of our recipes were included in the collection: Carrot-Praline Cake and Green Beans with Bacon & Mushroom. And, the Carrot-Praline cake was selected for the cover photo of the new cookbook!