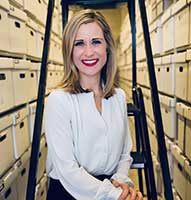 During his time in Congress (1949-1957), Velde (of Pekin) served as the Chairperson of the now infamous House Unamerican Activities Committee (HUAC), and dedicated the majority of his short public career to the crusade against the mid-Century Red Scare.  These efforts largely shaped the American culture of its time,  and contributed widely to the phenomenon now known as McCarthyism.  Despite his own unique contributions to a dark time in our nation’s history, the details of Velde’s legacy are little known even among Central-Illinoisans. This presentation will offer an overview of Velde’s public career, developed exclusively from the materials in his congressional papers collection housed at The Dirksen Congressional Center.

Bio:  Tiffany White currently serves as the Director of the Dirksen Congressional Center, located in Everett McKinley Dirksen’s hometown of Pekin, Illinois.  She graduated from Pekin Community High School in 2005 and from the University of Illinois Urbana-Champaign in 2008 with a Bachelor of Arts degree in Political Science & Speech Communication.  Ms. White has spent the majority of her career in both legislative government and not-for-profit management, having served as a Congressional Staffer in the 18th District of Illinois and as Chief of Staff to former State Representative Mike Unes (R-91).  Personally, she is a lifelong student of political communication, and a champion of principled leadership and civility in public discourse.

Short in-library business meeting will be held after the presentation.