Marking our country's bicentennial in 1976, the TV miniseries Roots brought about a great interest in tracing family trees. Genealogy quickly became one of the most popular "hobbies" in the U.S., right up there with stamp collecting!

Since my husband David and I had majored in social studies education in college, with history as our main interest, we jumped right in trying to learn about our ancestry, too.  I joined my home De Witt County, Illinois, Genealogical Society, which had been formed a few years before.

At this same time, our close friend Carol Jackson Halze (now Taylor) also became interested in family research. We three would sit at our dining table and go over what we had learned from talking to older relatives and what we needed yet to do and where we needed to search next.

We jokingly called ourselves "The Tazewell County Genealogical Society'' since there was no organized group in the county. Neighboring Peoria and McLean Counties did have societies.

In late summer of 1978, I saw an article about our County Home Extension Advisor Mary Fouts presenting a program about genealogy.  So, I contacted her, asking if she'd like to help us start a society for Tazewell County. She agreed, and we were on our way!

On July 31, 1978, the Perkins, Mary Fouts, and Carol Halze met to formulate plans.  We printed and distributed flyers to local libraries as well as sending announcements to local newspapers and radio & TV stations.

Several years later we legally changed our name to include Historical. 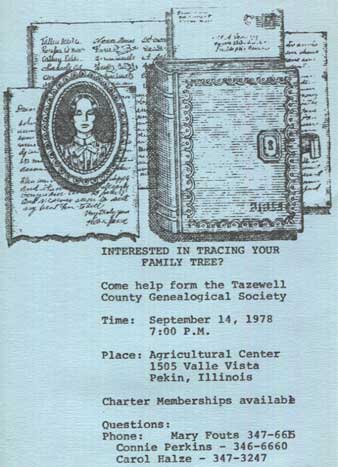 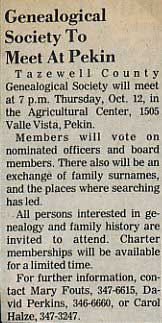 The first meeting of the Tazewell County Genealogical Society was held at the County Ag Center on September 14, 1978 to assess local interest in such a group and to start organizing.

A steering committee was formed to nominate officers and set policy.

Florence Hutchison, of the Jacksonville Society and the Illinois State Genealogical Society, worked with us in getting going.  We used the DeWitt society's by-laws as a pattern for ours.

And, the Society’s been on the move ever since!

The second Society meeting was held October 12, 1978, at the Agricultural Center. Officers and board members were nominated and elected with with Carol Halze Taylor becoming our first president.

There was also an exchange of family surnames and locations.

The Society's monthly meetings began being held at Parkway Christian Church at the corner of Parkway Drive & Dominion Avenue. 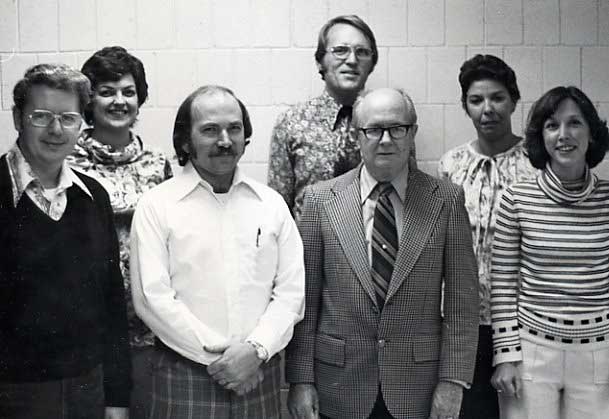 Board Members James Hatcher, Karus Hall, and Marie Summers were not present for the photo

At first, the Society's library collection was housed at the Pekin Public Library at the corner of Fourth Street & Broadway—on one shelf. But the rapidly growing collection soon caused a space problem. Even more of a concern was a proposed library policy to circulate the society’s collection through inter-library loan, giving complete ownership of our books and records to Pekin Public Library—including the option to dispose of our material at their discretion. So, in order to control our future, we needed to find a new space for our collection..

Through the generosity of the Pekin Chamber of Commerce, we were offered a small office space in the Chamber's building on Broadway. The Chamber also assisted in the printing of the Society’s first cemetery records book. After outgrowing the originally allotted space, the library collection was eventually moved into a three-room suite on the second floor. 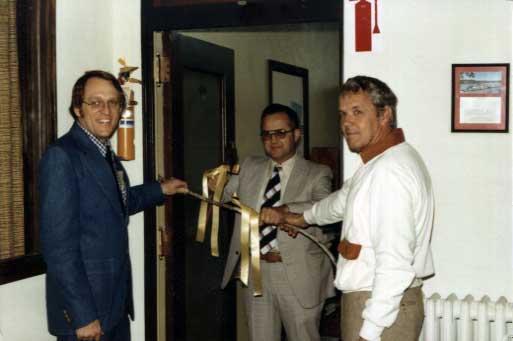 But the sale of the building housing the Chamber forced another move in January 1989 —into a large classroom in the old Franklin School building at 100 Broadway. This larger space enabled the Society to begin holding its monthly meetings in the Library instead of Parkway Christian Church.

As the years went by, the society found itself naturally involved in preserving the county's general history in addition to just the area's genealogy. In 1995, the term "and Historical" was legally added to the society's name to better reflect the activities of the organization.

In 1997, TCGHS was given the opportunity to purchase its own building through the generosity of a member. Thus, the library moved off of Broadway for the first time and became the Ehrlicher Research Center, where it’s currently housed.